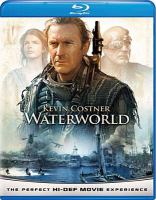 In the future. When the polar ice caps melt, the Earth becomes engulfed by water. Drifters sail across the waters of the world on their man-made ships, trading for supplies and salvaging what is left of civilization. Communities of survivors lives in towns called 'Atolls.' Evil pirates known as 'The Smokers' travel across Waterworld in search of a mythical island called 'Dryland.' The Mariner is a mysterious drifter who arrives at an Atoll. He is sentenced to death when the community discover he is a mutant. Led by their evil leader, Deacon, The Smokers attack an Atoll. A woman named Helen and her adopted daughter Enola bribes The Mariner to take them to Dryland. The Mariner, Helen and Enola are pursued by Deacon and the Smokers, when The Mariner learns the tattoo on Enola's back is in reality a map that will lead them to Dryland.
Publisher: Universal City, CA : Universal Studios Home Entertainment, [2009]
Edition: Blu-Ray.
Branch Call Number: 791.436 WATERWORLD
Characteristics: 1 Blu-ray Disc (136 min.) : sd., col. ; 4 3/4 in.
Additional Contributors: Gordon, Lawrence 1936-
Gordon, Charles
Davis, John
Costner, Kevin
Rader, Peter
Twohy, David
Reynolds, Kevin 1952-
Hopper, Dennis 1936-2010.
Tripplehorn, Jeanne 1963-
Majorino, Tina 1985-
Jeter, Michael 1952-2003
Howard, James Newton
Universal Pictures (Firm)
Gordon Company
Davis Entertainment Company
Licht/Mueller Film Corp. Productions (Firm)
Universal Studios Home Entertainment (Firm)

Not nearly as bad as everyone suggests. A little overlong, but mostly entertaining even if somewhat predictable. Solid three+ star movie.

The opening scene was far-fetched. Did not like that too much. The special effects are dated. The characters are very interesting, and might be the only thing that holds the film together. They are outrageous, and worth the watch if characterization is your thing. It is good for a very young crowd, and I can see that most adults would be either bored or pissed off watching this. I was surprised by the Sunday night 'Wonderful World of Disney' ending. Whether or not that was the intention, that is the feeling that I got from this film, and the reason I think it is good for young kids.

So, kiddies, how's this for a deliciously riveting opening scene from Waterworld, the $175 million movie-extravaganza?

A seriously balding Kevin Costner (as the badass "Mariner") is standing (positioned facing away from the camera) on his drifting trimaran while earnestly pissing away into a large, plastic measuring cup.

Following the necessity of this act, Mariner then pours this precious, yellow liquid into a ridiculous, primitive-looking filtering contraption. And once his piss has filtered its way into a waiting container below (are you ready for this?), he greedily grabs up the beaker and downs its contents in one thirsty gulp! (Shlurp! Shlurp! Shlurp! Dee-licious!)

In my opinion, this opening, thirst-quenching scene pretty much set the mood for the remainder of Waterworld's predictably tiresome 140-minute running time.

Believe me, this 1995, Sci-Fi/Action picture, set in the year 2500, was a total nose-picker from start to finish. The visuals were lousy, the dialogue demented, the battle scenes limp-wristed, and the characters despicable, one and all.

It really figures that Costner also served as a co-producer for this "grate-on-your-nerves" piece of junk.

Not only was Costner paid $14 million to star as the Mariner, but he also raked in a percentage of Waterworld's gross profits, as well. (This probably didn't amount to a helluva lot, though, since this film (deservedly) bombed, big-time, upon its initial release).

I know this recieved cold reviews but I liked this movie. If you want a movie to just sit back and enjoy then this is the movie.

I really like Kevin Costner - but dude, what were you thinking...a movie i recommend skipping.