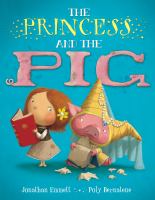 The Princess and the Pig

Two classic fairy tale types of metamorphoses occur in the same book, a bad fairy turns the daughter into an animal (like Swan Lake), and the other is a good fairy that turns a pig into a daughter (like Pinocchio), the really funny thing is that neither of these occurred. It is actually more similar to the Prince and the Pauper. The book continues to play around with these classics, and ends it by reinforcing that there was no magic involved. Although we know that the girl ends up happy, we cannot be as sure about the pig.

My four-year-old daughter enjoyed this one pretty well - she's quite fond of both pigs and princesses. It was a little slow-moving for her taste, though. She did look through the pictures many times and we read it just a few times. The illustrations were detailed and pretty fun. I enjoyed the message at the end. I also liked that most of the book's characters were depicted as having read stories - brings home the importance of reading.

My boys who dislike all such things as fairy tales and princesses loved this book. Love all the references to well know fairy tales too.

The princess craze is a relatively new phenomenon. I'm sure that little girls have pretended to be princesses for as long as the occupation has existed, but the current concentrated capitalization on that desire has taken the obsession to a whole other level. You can't enter a toy department these days without being bombarded with the idea that every little girl should wear pink, frilly, sparkly costumes and woe betide the child that might prefer a good unadorned set of overalls instead. Naturally, all this sank into the world of picture books after a while. Stories like The Paper Bag Princess were now being ignored while the latest pink monstrosity would suck up all the attention. So you can probably understand why I was a little reluctant to pick up The Princess and the Pig at first. My first instinct was to just throw it on the pile with the rest of the princessey fare. Fortunately, I heard some low-key buzz about the book, making it clear that there might be something worthwhile going on here. Thank goodness I did too. Ladies and gentlemen, two men have come together and somehow produced a book that thumbs its nose at the notion of a little girl wanting to be a princess. In fact, when it comes right down to it, this is a tale about how sometimes it's difficult to tell the royalty from the swine. Now that's a lesson I can get behind!

This book made me laugh out loud. Lots of things to point at and find, but most of all, really funny.

The day the queen didn’t notice that she dropped her baby daughter off of the castle’s battlements could have been horrific. Instead, it led to a case of switched identities. When a kindly farmer parks his cart beneath a castle so as to take a break, he doesn’t notice when a flying baby lands in the cart and launches upward the cart’s former inhabitant, baby piglet. The piglet lands in the baby’s bassinet and the queen, seeing a change in her daughter, is convinced that an evil fairy must be to blame. Meanwhile the baby, dubbed Pigmella, is promptly adopted by the kindly farmer and his wife. She grows up to love her life while Princess Priscilla, a particularly porcine royal, pretty much just acts like a pig. Years later the farmer and his wife figure out the switcheroo but when they attempt to right a great wrong they are rebuffed by the haughty royals. So it is that Pigmella gets to marry a peasant and avoid the chains of royalty while Priscilla has a wedding of her own . . . poor handsome prince.