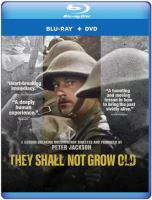 They Shall Not Grow Old

Well done, and deserving of my engagement. I think this is as good a bridge between industrial revolution and modern tech as we will ever see; lasting, crafted proof that no fiction could match. We needed something like this, to stand alone so future generations can see how utterly pointless, demoralizing, and deadly war is. I loved some of the closing quotes, but won't give them up here.

I had initial doubts, but the veteran voiceovers served perfectly as narration for something more significant than a documentary stuffed with facts. Same with sound bytes, as I assume the moving pictures were originally silent. The colourizing was great as well, notching up the realism to within arm's length. The overal experience felt like it was assembled from a planned movie storyboard, which I'm sure was the goal.

Not too much drama, not filled with attempts to make you vomit, just soldiers recalling their experiences and emotions beside horrific images. I'm very glad the film started with propaganda and recruitment posters, and the wrap up included so many declarations and feelings that ran against the grain for returning hero stereotypes. They sounded like they could have been returning from Vietnam if not Europe.

Amazing and heartbreaking at the same time. Highly recommended.

I had high expectations based entirely on the trailer. And when its good its very good. But overall its not terribly unique or insightful. But in the scenes where it "re-creates" old footage, its very good. If the entire film was just that, without any narration, it might have been great.

Very well done to add color and have vets tell their story. What a horrible killing field of blood and guts. What a waste of human life and resources. I doubt if we will ever put and end to killing one another. Am grateful I served in the Navy during peace time in the 1950's

Wow. This was heartbreaking and raw and fascinating. So much care went into restoring this footage and bringing these men to life. Getting to hear actual veterans tell the story was remarkable, as well as the fact that Jackson actually recreated all the sound for the footage (including getting a lip reader to give the men their voices back). Definitely watch the "making of" documentary that explains Jackson's process.

Spectacular!! Peter Jackson (yes, that Peter Jackson!) restored and colored the film and hired lip readers who carefully discerned what was said by the soldiers, bringing to life old silent footage and telling the stories of the soldiers of First World War. It includes interviews from British soldiers who fought. Trench warfare was absolutely horrific, but I think it's important to see the devastating reality of war. I have watched it twice and appreciate Jacksons effort to not let these men and what they went through in service to their country be forgotten by time.

Does a good job of making the First World War experience of British, Canadian and other Commonwealth soldiers very relatable, using their own words. The colourization doesn't start until a few minutes in, so be patient. It's worth it! The colourization brings distant, removed black and white footage to life. All of a sudden the subjects appear as real people, caught up in vivid horror. Be prepared to see the horror of the war. It's not pretty.

The footage was incredible, but it was so tragic, it made me wish I hadn't been born.

The first 20+ minutes are black & white, as are the last 5 or 10 minutes, as one would expect for WWI footage. In between there is one hour of pristine color footage with sound recording and all. I'm pretty sure Jackson somehow got his hands on a time machine and brought modern equipment with him. Of course, since such devices are still classified, they had to concoct a cover story about "restoring" footage. The use of a cover story also sidesteps the bigger ethical issue of not having just created a compelling reason for Archduke Ferdinand to avoid traveling to the Balkans. Anyway, the film brings to life and brilliantly tells the soldiers' story of WWI.

Sad and poignant but essential viewing. The title of this movie first caught me as how these young soldiers would stay eternally young in our minds due to their sacrifice. On further thought perhaps it meant that those who never survived would never grow old. All told in the actual voices of those who lived through WW1 and with actual archival footage restored and 'updated' it opens our eyes to the War To End All Wars unlike any other documentary you may have seen.

If you think our soldiers now have it tough, you should see this movie. After the initial sequences, when the troops get to the front line, the movie switches from raw footage to restored shots in realistic color and sound. Perhaps the most difference, though, is in the speed, which is corrected to modern film speed (frames per second), and that smooths out the herky-jerky quality old silent film has. Grotesque injuries and death are depicted, along with the miserable conditions of living in the cold and mud of trenches with lice and rats your constant companions. Narration is provided by the voices of WWI veterans, recorded years ago by oral historians. If you don't have an ear for accents, you may want to turn the subtitles on. The sound mix is very effective in 5.1 channel surround. Rated R for horrific war images.
When Sherman said, "War is hell," this is what he was talking about.

This was an excellent video. Sharpening old photos and film must have been extremely difficult from World War I. It would be interesting to see the industry put together World War II from the Allied, German and Japanese side of the conflict as well as this one was done. It would do history justice.

Very well made, it brings ww1 to life. My father was just too young for ww1 he was the backbone to the family coal merchants business in London England while his two older brother's served. Both uncles were in different regiments and found each other in Belgium. Can you just imagine that moment to know your bother was still alive. But then have to part once more. The youngest uncle showed me a solid leather cigarette case with a badly dented chrome rim. He said that it had saved his life as it was in his left breast pocket. He never gave up smoking!!

This movie is top-notch! The film editing, the soldiers' voices, the colorization, the way it was all put together is an absolute masterpiece of cinema! Gives a solders' view of WWI never before seen. Also recommend seeing Peter Jacksons' "The Making of They Shall Not Grow Old" - an 29-minute extra after the movie is over that is on the Main Menu with the movie.

2019 for anyone who wants to know what WW 1 was like, to live, to recruit, to die and then re-join society . incredible docum.

Absolutely stunning and heartbreaking. One of the best documentaries I've ever seen, hands down. A must if you like documentaries or are interested in WWI.

An amazing piece of work enhancing century old film and complementing it with interviews with veterans from the battles in France & Flanders.
Also, the special feature with Peter Jackson showing how the film was made is good too.

A 10 out of 10! Wonderful documentary, the best we have ever seen by far. Such authentic, informative, real film of soldiers and how they had to live, tanks, horses, bombs, gunfire...... remarkable!

Stunning, clever, unusual - this is a remarkable documentary that brings soldiers from long ago straight into the present day. Jackson has outdone himself in this remarkable public service.

Simply the best WWI documentary ever made.
Peter Jackson has created a masterpiece.

So good and sad.

Amazing how colourizing original black and white film brings the war into the now.

Timeline covers from the outbreak of the War to the aftermath. The highlight is the restored footage -- sound effect included. This is coupled with background narratives. The narratives are generic, with some insight into Battle of Somme -- where the tank was first deployed,, mostly, they are associated with the daily life of the grunts.

Amazingly excellent. The conditions of trench warfare are told in all its horror. Yet in the midst of constant death and horrible conditions the astounding ability of the soldiers to survive thru humor is a tribute to the human spirit. This film should be seen by everyone!! Kristi & Abby Tabby