Saved Searches Advanced Search
As of May 18, MCPL has expanded hours at its branch locations. Check the locations page for your branch’s hours.
The Red Bridge Branch will be closed until further notice for maintenance. All due dates and holds will be extended through the closure.
All open MCPL branches have resumed technology services including access public computers, copiers, fax, and printers. Visit the MCPL COVID-19 Information and Updates page. 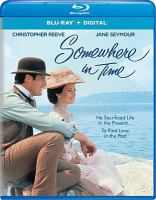 Such a different premise and a wonderful movie. Although Reeves is not my favorite actor, he was great in this film. Jane Seymour never looked so lovely as in this timeless love story. Gorgeous costumes, endearing music, well rounded script, nostalgia at it's best...

Whenever I hear of a Richard Matheson story, I expect to be freaked out or grossed out. Watching Somewhere in times made me cry my eyes out. My new favorite "unstuck in time" romance.

If you love romantic tear-jerkers you'll really like this one! It's a classic. Five tissues.

I watched this Movie many times, with my Mother when I was a young Girl. Couldn't remember the name of the Movie, finally figured it out googling Christopher Reeves & Found the Movie; Somewhere In Time. It Is definitely the Movie, Just got it on hold to watch at my local Library, can't wait to watch it again. I Remember it being the most Dreamiest of Movies in a Beautiful Historic Hotel & Setting. The Actor's Reeves & Seymour where just Amazing in a world away but so close to my heart. Sweet time period that Girls back in my day, dreamed of living in. Puts you right back in that time, Beautifully done. Guess I'm a Hopeful Romantic & Historic Buff. Also found out that The Grand Hotel at Mackinac Island is still open, where it was filmed at. Another place I'll put on places to see in my Lifetime."Was So good to see this Classic Again, will be owning this one!"

It is an interesting love story with a major twist.

Not only is it a role with Christopher Reeves, whose career was cut short, it is a movie I really like. It is likely more drama and love story than Sci-Fi but I still found it interesting enough.

If you fancy yourself to be something of a hopeless romantic who really enjoys watching a love story that is preposterous beyond belief - Then - "Somewhere In Time" is just the picture to satisfy your tastes.

Released back in 1980 - This film barely makes up for its ridiculous plot-line of time travel by casting 2 very good-looking actors, Christopher Reeve and Jane Seymour, in the lead roles.

IMO - This 1980 Chick Flick really should've come with a very stern warning advising all viewers that this intense tale of obsession was only meant for the hopeless romantic and that everyone else should watch it (with extreme caution) at their own risk.

Surprisingly written by SyFy novelist, Richard Matheson (of "I Am Legend" fame) - Somewhere In Time's biggest drawback was its repeatedly overwrought soundtrack music which was amplified so loudly at times that it became downright irritating, and, yes, intolerable.

But - On the other hand - Some of this film's location shooting on picturesque Mackinac Island, Michigan was very impressive. Indeed.

Christopher Reeve & Jane Seymour are beautiful in this movie, as is Christopher Plummer as the antagonist. The ending made me tear-up (don't want to say cry) and I just put in for it at the library. Whenever I hear the musical score by John Barry well, let's just say it's beautiful. Looking forward to seeing this movie again, ready for another tear-up.

I checked this out to see Mackinac Island again. Years ago I was on a senior bus trip and walked the grounds of this magnificent hotel and had a buffet lunch. Cars are not allowed on the island but were allowed for the movie. Caught a glimpse of Jane Seymour who was filming for her bedding line at the hotel. Special features talks about the fan club and their reunions.

One of the very best romances EVER. This is on the top of my list for favorite movies.
Scenery is gorgeous. Music is unforgettable.
Seymour, Reeves and Plummer are excellent in their parts.
Just enjoy and don't dissect it. Don't listen to the negative reviews.... this movie is excellent.

Come for the unique and improbable plot. Stay for the chemistry between Christopher Reeve and Jane Seymour. Return, year after year, for John Barry`s unforgettable score.

I love this genuine movie of Romance and Love with the beautiful Jane Seymour and Christopher Reeves, great matches for this movie. I also really like the acting performance of Christopher Plummer to go along.

If you want really good "time travel" video
see Richard Curtis's ABOUT TIME
or THE TIME TRAVELER'S WIFE, which is also an excellent book.

One of my favorite romances of all time. I love the chemistry between Jane Seymour and Christopher Reeves. I like to watch this film on cold, snowy days!

This movie, which is much like ALL of Edgar Rice Burroughs work, has fantastical elements. Those elements push along a deeply emotionally satisfying and romantic plot. Jane Seymour and Christopher Reeve are beyond beautiful.

I remember seeing this in the theater when it came out and being thunderstruck by it.

I saw it again recently, and loved it all the more because I found my true love too. Back then I was a kid who didn't really believe in that sort of thing.

Enjoy what will become one of your romantic favorites.

Where did the watch come from originally? Think about it.

I LOVED this movie--and was greatly surprised that I did. The period costumes, the great acting, and the location: Grand Hotel at Mackinaw Island made it really special.
As for going back in time: lighten up you linear thinkers, open up your mind to a beautiful love story, and bring out the Kleenex!

rslade--the return trip comes because there's still a penny (dated 1979) in Collier's (Reeve's) suit jacket pocket, which he forgot to leave behind (remember that the only way he's able to travel into the past successfully is that anything that could possibly remind him of the present has been stashed out of sight). The second he takes the penny out & sees its year--that's it. That's why describing 1912 on a played-back tape-recording didn't work. There were no tape-recorders in 1912.

One of my 80s favorites. Christopher Reeve and Jane Seymour make screen magic with an elegant love story. Good stuff even 30 years later.

Time travel through a shift in consciousness, despite the mental struggle of Reeve's character to go back in time. beautiful movie.

A thought worth pondering: Time-space doesn't exist. It is an illusion created through perception.